You are here: Home / America / The road to the Restoring Honor Rally

PART 1 of THE BLESSINGS OF AUGUST ~

Sometimes, God may reward us for our good works, but most of the time, I think, He does things for us just because He loves us and He can.  August 2010 was a time of out-right, clearly-evident, blessing-upon-blessing, in my house, and not one of us did anything extraordinary to deserve it! We did not set a course to fast longer and pray more;  there was no uncommon repentance or life-rocking revival.

This is a testimony of God’s loving kindness and His constant faithfulness. “And they (the believers, saints) overcame him (the devil, satan) by the blood of The Lamb (Jesus Christ, sacrificed unto death, buried and raised from the dead) AND by the word of their (mine and yours) testimony…”  Revelation 12:11

There was a rally in Washington, D.C. on 8-28-2010 called Restoring Honor.  It was organized to bring people together from all over America, to thank our soldiers and restore honor to their gift of service.  We also saw it as a time to come together to ask God to restore our country, under His care.    From the moment we heard about it, my older children and I wanted to attend it.  We first heard about it on Glenn Beck’s program.  With 9 of us at home, I looked at our budget, juggled and jiggled;  attempted to manipulate it and then, in good conscience, decided it just wasn’t feasible.  I don’t even think I prayed about it, at that time, and I certainly wasn’t approaching my husband about it, when our ends barely ever meet anyway.   It was evident to me that going on such a trip was not a necessity and like most everyone I know, just meeting the needs of our large family was pushing it.

Not a lot of discussion was needed, to explain why we weren’t going.  My family lives firmly in reality and we all knew this wasn’t the type of thing that people like us actually do.   =)   Don’t get me wrong, we enjoy our life.  There are lots of free and inexpensive things to do together.  We live a few miles from Lake Lanier,  with free access to a little sandy beach, water and tons of Georgia clay!  Georgia is home to many, beautiful water falls and inexpensive state parks.  We love to hike and camp and picnic.  Amicalola Falls is stunning! 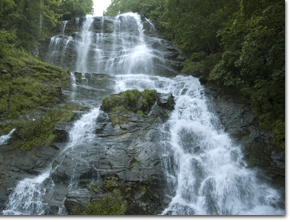 We look forward to the county fair every year (free admission day), Burt’s Pumpkin Farm (free fall photo op without purchasing even one pumpkin!) and walking down main street; drinking hot cider and listening to carolers in December.  Traveling, visiting museums and cultural centers, and such, tend to be more expensive and not something we have done much of over the years.  So, none of my children complained about not going to the Restoring Honor Rally, but…

Sometimes, when we would watch Glenn Beck and he would enthusiastically talk about the rally, I would notice the children speak a little wistfully, “Oh, that would be so cool!”, “I wonder who else is going to be there?”, “Can you imagine, actually seeing The Lincoln Memorial or The Washington Monument?”  They were just talking and I was just observing them.  I don’t think they even realized what I was seeing.  At some point, I started to speak, a little wistfully, to my Father God.  “It really would be so cool, God!”, “Just one time, Lord, I’d like them to experience the other possibilities of life.”  Sort of like, an occasional, brief, conversation-in-passing with a trusted friend. 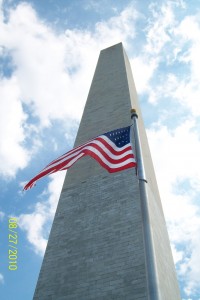 You know how it is to have a thought race through your mind and you don’t really grasp it or think about it, it just flows across?  Toward the last week in July,  I remember a thought of asking for help to go to D.C.  It was a “flutter” of a thought.   Eventually, I grabbed it, examined it’s merit and unceremoniously set it aside.  First of all, I didn’t want to ask someone to help with something as frivolous as a “vacation” and second, I didn’t know anyone with that kind of money, that wasn’t already helping someone with their cost of living.  I can say that I felt prompted by God, in response to my heart-prayer, to ask for help and I flatly refused.  I said, “no” and then I didn’t speak of it again, wistfully or otherwise.  (How’s that for audacious behavior before the Creator of the Universe?  I do not recommend it!)

I have a facebook page (started so I could keep in touch with family.)  My sister has a website forum (Mama’s Coffee Shop) that I joined to boost her numbers and support her.  Because it is hers, I’ve actually left a couple of comments.   Recently, starting this blog was an uncomfortable necessity, if I wanted to review homeschool curriculum, for the first time, this year.  As a “techie”  (is that even a word?), my growth has been a bit stunted.   Anyway… The Restoring Honor Rally started a facebook page and I “liked” it.  I would visit it and read what everyone thought of the rally.  I’d look at the auctions  and general updates.  One evening,  I clicked on the discussions tab, that I had never really noticed before, and found so many people  “talking” about so many topics having to do with the rally.  I read through post after post.  I felt connected to strangers.  Then, before the thoughts or possible repercussions were even fully formed,  I began to type:

Topic: Sponsorship or Scholarship available from anyone?

I’ve never asked anything like this before, but…going with the “…you have not, because you ask not…” motto ~ would anyone like to sponsor (yes, pay for) my four teenage children and me to go to the rally? I have a small car and I’m willing to drive from Georgia to D.C., …the flesh and heart is willing, but the bank account is impossibly weak. We watch Glenn Beck every day as part of our history/government/economics class and we so want to participate “on the ground”. I HAVE a 14 y.o. son, 16 y.o. daughter, 18 y.o. son and 20 y.o. daughter that have a heart for God and America. What I do NOT HAVE is gas money and a place for us to stay. We have been praying about this since it was first announced and nothing has happened. I figured the worst that could happen with this plea is being told “no” and I can handle that. My example is one of pressing in and not giving up.

So, there you have it. Any one or more want to send us in your place?

God bless and keep each of you and may He bless America in answer to our cries.

This is the actual post copied from the Restoring Honor Rally discussion board.  It is still as embarrassing as it is bold, even though I know how God used it to accomplish His purpose.   I can say that three weeks of wrestling with God and wanting things my way, did me no good.  As I typed,  I felt compelled to get my children to Washington, D.C.  I was challenged to obey, let it go, and let God, be God. I was reminded that a little faith can move a mountain. I posted this note and then I told my husband and children what I had done.  I wasn’t sure what they would think of me.  As I re-read it, I discovered I was torn, believing no one would respond in any way and so hopeful that just one person, with-more-money-in-the bank-than-they-knew-what-to-do-with, would see it and make us their “charitable contribution”.  That wasn’t one of God’s ideas, either.

At this point, I began to pray, believing. After I “gave in” and asked for help, my idea was of a rich-uncle-with-a-soft-heart type benefactor with no sacrifice involved.  God’s idea was to move across the hearts of those with little and some with even less.   Within days we had notes of prayer and encouragement and calls of financial support.  The first woman that called me, asked what the needs were to get us to D.C., and then pledged to pay for our hotel room and gas.  She encouraged me to accept what God was doing and said maybe we were someone’s “Pay It Forward“.

Every comment to the board was not a positive one.  I was hurt and embarrassed by some comments that were made, especially in such a public forum, and where my children could read them, but the support that surrounded me, from people I’ve never met personally, was like nothing I’ve ever known.  They buoyed my spirit when it was weak.  My emotions were on the edge of my nerve endings.  I read nearly every comment, out loud to my family, through tears.  I could not fathom how God was using the “thread” on the rally board.  One man shared his personal testimony with me.  He had posted several comments of doubt and accusation.   In public forum he called me a “scammer”  and he believed it.  I felt broken and weary of  trying to explain or defend; so, I simply blessed him, in open forum, then I let it go, and let God, be God. He says God changed his heart and changed his mind.  He became one of my dearest champions.  There is no balm to soothe a wounded soul, like the love of God.

Another was reminded of her faith that had been buried under discouragement and disillusion in the state of our country.  She saw Faith, Hope and Charity alive in American hearts and her spirit was renewed!

Many small amounts came together to make one big difference.  God had provided a way, where there seemed to be no way, that would allow us to go to the Restoring Honor Rally in our nation’s capitol!  We had pledges and cash to cover Metro fares, hotel parking fees and gas.  One sent $10 and another sent $5.  Someone pledged to give $25 and then wrote the check for $28, in honor of Glenn Beck’s show on 8-16 about a donation of 8 cents and referencing the Biblical story of the widow’s mite.  God stirred hearts and every financial need was met, nothing more.  To the degree that, we had a $30 pledge to pick up in D.C. after we arrived.  Seemed simple enough in theory, but the rally was huge, everything was busy and we didn’t make the connection.  Never the less, I had enough money to fill the car at our last stop before home.  God knew I wouldn’t need an additional $30; so, I didn’t get it.  It was nice to let go, and let God, be God. 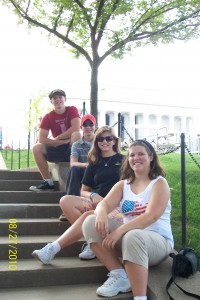 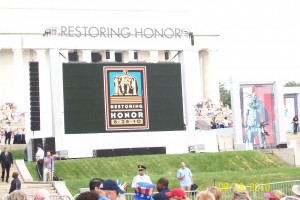 Last weekend, a friend said, “I think God just likes to hug and kiss and love on us.”

There is no god like Jehovah!  We are called to love one another, as He loves us.  My cup runs over…