You are here: Home / Bible / Behind the Music

A couple of my daughters write music and lyrics.  Often, if they sing a new song, one of the first questions one of us asks is, “Did you write that or did someone else write it?”  We appreciate knowing the origins of music and learning the back story.

Mr. Pipes and the British Hymn Makers, is a story about “two young teens who, while on vacation in England, are befriended by an elderly English gentleman called Mr. Pipes.”  Annie and Drew first meet Mr. Pipes when they’re drawn into an old cathedral by music.  Music that is being played on a pipe organ, filling the cathedral with grandeur, as Mr. Pipes calls it.  It is unlike any music they’ve heard before.   Through the summer, Mr. Pipes gives them fishing lessons and rowing lessons, teaching them patience and perseverance.  He tells them stories about British hymn writers, their life and times, and music.  He shows them the value of traditional praise and worship. 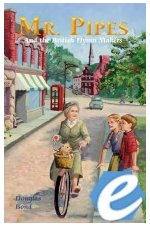 Mr. Pipes and the British Hymn Makers, written by Douglas Bond and published by Christian Liberty Press, is the first book in a series.  It is available in print, and also conveniently as an e-book, presently on sale for $8.79.  The complete 4-book set can be purchased for $38.99.

This book is living literature.  I read it aloud to my children, because I wanted several of us to hear it at one time and be able to discuss it.  It is written for 7th through 10th graders, but 7 years old through adult comprehended it just fine.  It is rich in historical facts and you’ll find nuggets of Scripture throughout.  487 pages cover the hymn makers:  Thomas Ken, Isaac Watts, Charles Wesley, William Williams, John Newton, William Cowper, Augustus Toplady and Thomas Kelly, and John Bunyan, plus Scottish Hymn Writers, Anglican Hymn Writers of the 19th Century, Women Hymn Writers, and additional British Hymn Writers.  You’ll also find Further Reading at the back of the book.

I chose to print this book, double-sided on standard-size copy paper, put each page in a clear protective cover and place it in a three-ring binder.  I made extra copies of the few illustrations, sketches that are in the book and used these as coloring sheets for my children.   I also created word puzzles to correspond to each specific hymn writer, and had them draw pictures of the story, as I read it.  There are also numerous YouTube videos to watch that gave them a clearer picture of a place or a thing, like a pipe organ.

We really like this book and I hope to purchase the rest of the set, so we can continue the adventures of Mr. Pipes and his friends.

To read other reviews, written by my Crew mates, click the banner below.

Disclaimer*   A PDF copy of Mr. Pipes was given to me free of charge, in exchange for my honest review, as a member of the Schoolhouse Review Crew.  I receive no other compensation for my reviews on this blog.  The opinions expressed are my own.
Thank you for your comments.
Contents of this blog are copyrighted;  they are the property of Knee Deep In Grace and may not be used without written permission.