Today is the first of 40 days without TV in my house.  It’s been years since we’ve not had TV.  I used to be able to say that  it had been years since we watched TV.  At one point, we had been without TV, by choice, for more years than we had had one.  We decided to get Basic Cable connected to keep up with the Presidential election, for Government & Economics class, at the beginning of 2008; and we’ve had it since then.  Ugh!  It’s not that our program choices are bad, poor, or even questionable, usually.  It just seems to be a robber of time, imagination, and interaction.

Presently, this is an experiment.  We are observing each other and asking the questions of ourselves, “How is my life affected, negatively or positively, without TV?” and “What changes do I see, in myself or others?”  I’ve noticed a few bad habits that have taken up residence over the years, but I have every expectation that they’ll be so malnourished during this time that they’ll slip away into non-existence.  “May I finish this show while I’m eating? It’s educational.”  “Instead of a story tonight, maybe we could watch a short movie?”  “I started watching this with everyone and it’ll be over in half an hour, do I have to go to bed on time?”  “It’s too cold, too wet or too hot; and it takes too much energy to be outside.  I’d rather watch TV for a few minutes.”  I want to re-establish good habits, and the desire for them.

Not nearly enough reading, drawing, and creativity has been going on around here lately.  My aim is to bring attention, once again, to what we’re missing when we spend more time watching how something is made, instead of making something ourselves; or watching someone else sing, praise, pray, or dig into The Word, instead of purposefully hiding God’s Word in our own heart.  We watch someone prepare a gourmet meal on The Cooking Channel, but end up with take-out pizza because we were sitting, watching TV instead of grocery shopping.  Ugh!  It’s my intention to see this thief eradicated, and balance restored.  I want my family engaged in living their own life, instead of watching others live theirs.  I want to re-establish good habits, and the desire for them. 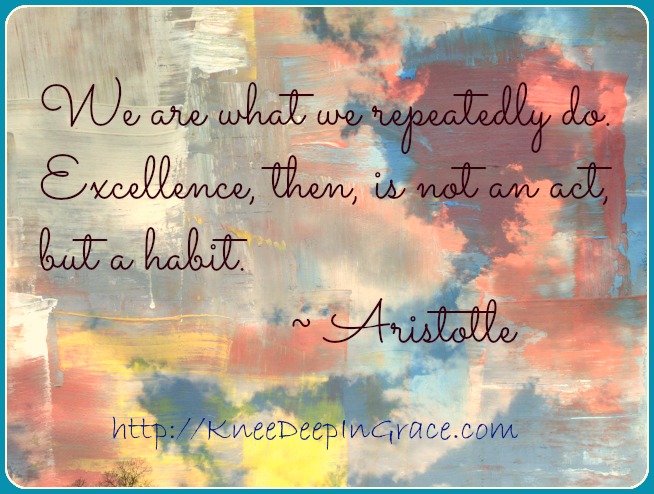 How do you maintain balance in your home?  I’ll let you know how this works for us.

*Contents of this blog are copyrighted; they are the property of Knee Deep In Grace, and may not be used without permission.